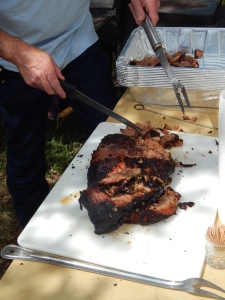 On celebration day Rick, as an appetizer, smoked countless deer sausage made from the same deer as the previous days venison backstrap – the deer being taken by Rick from their property. To add to the meatacular banquet six whole chickens were smoked before the seemingly endless hoards of truly great neighbors and loving family members arrived. I personally made 9 gallons of margarita mix to chill in the machines Robin had rented. All the beer, soda, and thankfully water were to be had by all. And another very large bottle of Cazadores Tequila appeared as well . . . via Wes because he likes it’s spiciness. This played an important teaching tale involving Meredith’s sister we’ll delve into later.

Chips with homemade dips, every type of relish imaginable, all types of breads, at least seven different styles of potato salad were counted, sliced home grown tomatoes, practically buckets of all styles of BBQ beans, Sandra’s Salsa (I believe from Wimberley, Texas) made a welcomed appearance. The infamous Sanda’s Salsa was introduced to me via Robin and Big Rick when Rick and another groomsman, Wes, and I were sharing a house while in college. Rick’s parents would bring salsa, deer sausage, and cutlets to our house affectionately named the Popo Faggot. No derogatory meaning was implied it was just one of three domiciles under the umbrella of The House of Prin (I believe Wes created this moniker), the other two being The Rabbit House and The Fast House. More on these another time. And Sandra’s Salsa is outstanding by the way, Rick quickly learned to hide it as best he could.

As Rick was tending to guests Big Rick, Sanda’s husband (sorry forgot his name), and Rick’s Granny, with knives sharpened, made quick work butchering the meats. They have such a close knit family and it was such a joy to see them working together with friends in a seamless way. Sandra’s husband is seen slicing brisket in the photo. He claimed he was having a difficult time keeping the meat from shredding. Big Rick was heard to have said that competition brisket is based on texture and slice-ability and has nothing to do with taste. And that is totally the case. I watched as Big Rick pulled one brisket from Smokey, a smoker resting on a axle with VW hubcaps, and even while being wrapped in foil it was seen to be as loose as a Christmas jello being pulled from a mold. Topped with Robin’s perfectly balanced homemade BBQ sauce it became a delectable treat beyond words. And this was just the main course. Eight different fruit pies were available for dessert as well as two large banana pudding cakes, a huge peach cobbler, a large pecan cake, and a table top sized white frosting cake, one side chocolate the other lemon inscribed with the bride and groom’s name. Many other sweet treats I am sure I failed to mention and I am sorry because I know so much time was taken to make them. Talk about gustatory overload, it was magnificent, a feast of feasts that would have made any Roman proud.